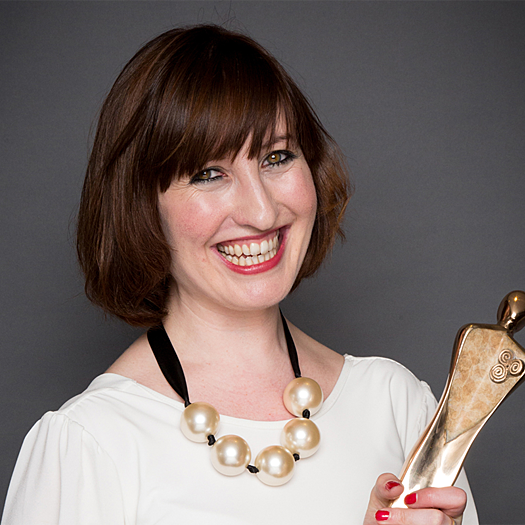 Anna Rodgers is an multi IFTA winning director and producer. Throughout her twenty year career in features, television and advertising, she has won numerous national and international film awards and was the second woman to win the Best Director award at the IFTAs for her documentary film Somebody to Love about relationships and sexuality for people with disabilities.

Anna's films has been selected for over 50 major film festivals worldwide from Silverdocs to Frameline, and have been released theatrically and on DVD. Her most recent documentary Strong at the Broken Places won Best Short Film at the inaugural Belfast Doc Fest. Her debut feature Today is Better than Two Tomorrows was selected for Full Frame where she was nominated for the Charles Guggenheim Emerging Artist Award. This film also won Best Documentary Feature at the inaugural Luang Prabang International Film Festival, Laos. Two of Anna's short LGBT films - Hold on Tight and Novena - have been nominated for the Iris Prize, the world's biggest LGBT film prize, where her film Hold on Tight was Highly Commended. It went on to win multiple awards including a Radharc Award and was released on DVD by Peccadillo Pictures as part of a Girls on Film collection.

Anna Rodgers has also directed and produced numerous high impact television documentary series and single documentaries for RTE and Virgin Media including the Celtic Media Award winning series Crumlin, Keeping Ireland Alive, and My Broken Brain. She was series director on Keeping Ireland Alive, overseeing the stories of 40 film crews filming in the health service for one single day.

She has served as a board member for the GAZE International LGBT Film Festival for four years, and acted as a jury member for Iris Prize in Wales, Banff World Media Awards and Shoot Out Hamilton, New Zealand. She has hosted panels and Q&A sessions for the IFI, SDGI, Guth Gafa and Sheffield Doc Fest and has participated in training programmes such as Docs in Progress Peer Pitch, EURODOC Script Development, Oxdox/ European Doc Network Script Development and Crossover Labs.

Anna Rodgers is managing director of Invisible Thread Films with co-founder Zlata Filipovic. Their documentary about the marriage referendum in Ireland, The Story of Yes, was nominated for an IFTA in 2016 and was Commended at the Radharc Awards. Their recent short film Welcome to a Bright White Limbo was selected for Tribeca, where it received a special Jury mention. Through her own company she has directed or produced various online or digital campaigns for organisations such as Liberty Insurance, Keelings Fruit, Headstrong, BeLonG To, GAZE, TGEU, TG4, Iarnrod Eireann and others.