A dance film capturing a performance by a dancer who has cerebral palsy.

Armour Off is a dance film commissioned by Croi Glan Integrated Dance Company. It captures a performance by dancer Linda Fearon who in lieu of presenting a cancelled live performance was instead filmed at her home in Co. Armagh, Ireland at the height of lockdown 2020. The film interweaves movement and spoken word written by Linda, exploring her relationship with her body and self throughout her life.

The film is directed by award winning film-maker Anna Rodgers and Produced by Zlata Filipovic; the original live production of Armour Off! is produced by Croi Glan Integrated Dance Company and devised by Linda Fearon in collaboration with Australian based choreographer Caroline Bowditch and composer Niall O’Carroll, all artists with disabilities. 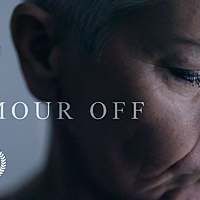