The Yellow Bittern - the life and times of Liam Clancy

A cinematic and confessional documentary biopic on the raucous life of Liam Clancy, the last surviving member of iconic Irish band The Clancy Brothers and Tommy Makem, who at their height, were out-selling the Beatles, and playing for JFK and the Ed Sullivan Show. The band changed the face of Irish popular music and influenced artists as disparate as Bob Dylan, Tom Waits and The Pogues.

But for all their fame, their story remains largely untold. This darkly revealing portrait goes behind the mask of the performer and delves deep into the psyche of Liam Clancy as well as his troubled personal life where the excesses of rock-and-roll found their way in to the world of folk. 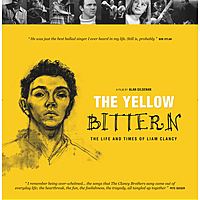