Novena captures a rare moment when two people who are gay and lesbian give a speech at a mass.

St. Joseph's Redemptorist church in Dundalk host a Novena every year, and with nine days of prayer attracting thousands of worshippers, it is the biggest festival of faith in Ireland. During this particular Novena, the director of the event Fr. Michael Cusack, decided to make the theme â€œThe courage to be yourselfâ€ inspired by a mother in his church, whose gay son felt rejected by the Catholic community. Fr. Cusack reached out to two members of the LGBT community, Kay Ferriter and Stephen Vaughan, and invited them to address the congregation about their experiences of being gay and lesbian in Ireland and feeling excluded by Catholic doctrine. Knowing his community to be a welcoming one, he hoped that the outcome would be positive.

Novena documents the powerful speech that was made that day and the aspirations of one priest for a more inclusive church. 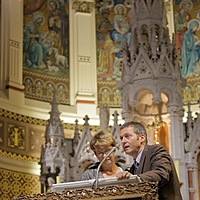