Relationships and sexuality are explored with people who have physical or intellectual disabilities.

A one hour creative documentary on sexuality, relationships and disability in Ireland. It won numerous awards, was sold to various international broadcasters and in 2014 I received an IFTA for best director for this programme - only the second female director to win this award.

The documentary was discussed in the Seanad after broadcast which contributed to the law around sexuality and people with intellectual disabilities being changed. 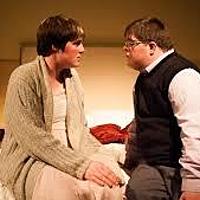