In an infamous strip of motels, a large infrastructure project upends the lives of its denizens.

In an infamous strip of motels known for their illicit activity, a working poor family and a disabled veteran look to an uncertain future and possible second lease on life imposed by one of the largest infrastructure projects in U.S. history.

Motel Drive (MD) takes place in Fresno, California, beginning in the golden years immediately following the end of World War II. It was the strip for entertainment in the region: Nat "King" Cole, Frank Sinatra played on the strip. And then in 1964 a freeway bypassed the strip, and thus began a rapid decline into an entirely new, stark reality of human trafficking and narcotics.

Enter the largest infrastructure project in history - California's High-Speed Rail Project, set to break ground on Motel Drive. We see our protagonists, the Shaw family, have their lives upended by The Project and come out the other side, struggling with their own demons along the way, all in the hope of a better life and a place to call home.

Motel Drive is a story told over seven years, in a verité perspective as seen through the day to day lives of its denizens: 3 motels, on one city block. 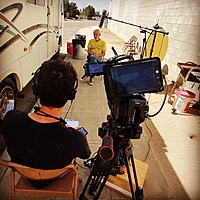