Jimmy in Saigon explores the mysterious life and death of James Austin McDowell, a Vietnam veteran.

Director Peter McDowell was only five when his brother died, and much about Jimmy’s death remained hidden from him. Through over 200 of Jim’s letters, interviews with Jim’s friends and family, and filming of the truth-seeking journey that has led Peter across the United States, Vietnam and France, Jimmy in Saigon is an elegiac work examining grief, family secrets, war, drug use, sexuality, and healing.

Jimmy grew up in Champaign, Illinois, and was drafted in 1970. After serving a tour of duty, Jimmy returned to Saigon even as the war continued. During the year he lived in Saigon – the last year of his life – Jimmy worked as a reporter for the The Overseas Weekly, and lived with a Vietnamese family. On the night of June 5th, 1972, Jimmy checked in to an American military hospital with a serious infection. He was dead the next morning.

After more than 40 years of silence, Peter tells Jimmy’s story while discovering his own. 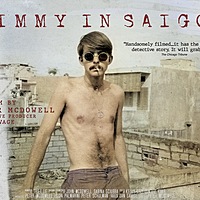