Finding Carlton - The Story of Jazz in India

Finding Carlton - The Story of Jazz In India

A maverick dedicated to pure jazz, particularly bebop, Carlton, 68, is an unsung cultural custodian who has nurtured hundreds of young musicians in the jazz idiom, and who still plays to half-empty Calcutta hotels. Where other jazz artists of his generation, including the celebrity "Louis Banks", quit post Independence Communist run Calcutta for prosperity in Bollywood, Carlton remained; devoting himself to his craft and to sustaining an ever-shrinking jazz community in a city hostile to all reminders of Indiaâ€™s colonial past. VeritÃ© scenes of Carltonâ€™s isolated, impoverished, yet passionately dedicated existence, and through archival material and poignant encounters with other artists, it tells an untold story of cultural cross-pollination: born of pre-war African-American diaspora, American Army presence in Calcutta during the Second World War; and of US State Department sponsored jazz tours in India. The film also illuminates the influence of American jazz on Bollywood 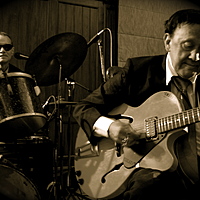