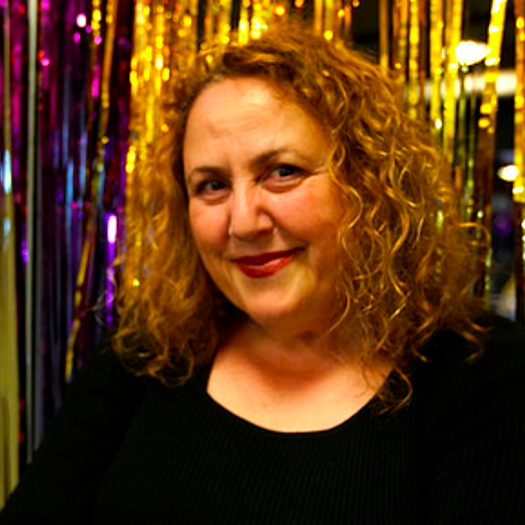 Therese Shechter is an award-winning filmmaker, public speaker, and the founder of the production company Trixie Films. Her work fuses humor, activism, and personal storytelling to disturb what's considered most sacred about womanhood.

Therese began her two-decades-long film career as an intern at Robert DeNiro’s production company Tribeca Productions. Since then, her work has been screened and streamed globally on TV and home video, at the Brooklyn Museum and the Kinsey Insitute, and at film festivals from Rio de Janeiro to Istanbul to Seoul. Her work is in the collections of hundreds of universities, non-profits, and libraries, and has been covered by The Atlantic, New York Magazine, Vice, The Chicago Tribune, The New York Post, Elle, The Guardian, and Ms Magazine, among others.

Therese’s documentaries grow out of taboos around womanhood, and often reflect how her own life has shifted uncomfortably under their weight. Frustrated by the lack of narratives that mirrored her own life, she has created films that use humor to explore a host of thorny questions around women’s roles and destinies.

At 13, her world was rocked by the feminist TV special Free To Be…You and Me which informed her she didn’t need a handsome prince to live happily ever after. With that inspiration, she went on to make her first documentary I Was A Teenage Feminist which asks what it means to be a feminist in the 21st Century. Her second feature, How To Lose Your Virginity, investigates the myths and misogyny around our so-called ‘precious gift,’ and her new film My So-Called Selfish Life takes on the very heart of female identity: motherhood.

My So-Called Selfish Life is a paradigm-shifting journey through one of our society’s greatest social taboos: choosing not to become a mother. Created with the support of the Canada Council for the Arts, New York State Council of the Arts, and close to 800 individual donors, it premiered at the Woodstock Film Festival in 2021 to critical acclaim. The film is currently screening at film festivals, colleges, conferences, non-profits, and global virtual streaming events. This topic has hit a nerve with her audience: the Facebook group she created for the film now has over 11,000 followers and a movement is growing.

Trixie Films is an fully-independent female-led production company based in Brooklyn.