This observational film explores disability, inclusion and empathy in a classroom and beyond.

THE ABILITY EXCHANGE is a documentary film about an innovative Disability Studies course at NYU Polytech where engineering students and self-advocates with cerebral palsy team up to make movies. This observational film illustrates the trajectory of personal growth and bonding that these first time filmmakers experience, during a journey of which the line between ability and disability gets blurred, definitions of “normalcy” and “inspiration” challenged. THE ABILITY EXCHANGE invites the viewer to reflect on what it takes to understand and appreciate a person, a community, a culture, and how this exchange of abilities and perspectives empowers lives. 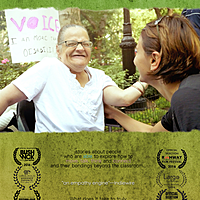