A film showing absolutely unique images and heretofor never seen on the screen of the paintings and engravings at two of the four rock art sites of Tchitundu-Hulu: Tchitundo-Hulo Mulume or man, and Tchitundo-Hulu Mucai or woman. The complex is located in the Mocamedes desert, the furthermost northern extension of the Namib Desert. Much of central Angola constitues a high plateau, surrounded by arid coastal plains in the south forming the northern extension of the Namib Desert that extends south down the western coast forming the hinterland of Namibia to the north-western coast of South Africa. The two sites stand about a kilometer apart, the former, set on an inselberg, a rounded granite hill covered in ancient geometric engravings thought to be the work of the Ovatwa hunter gatherer communities that inhabited this region until after the 1960s, with an overhang or shelter with drawings on its roof and the latter is composed of a smaller shelter with two cavities. 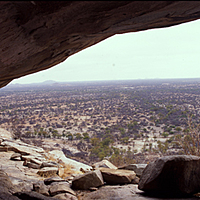 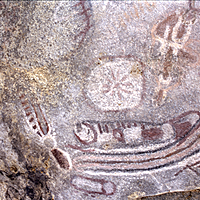