More than 100 years ago the great scientist, engineer and humanitarian Nikola Tesla predicted the current environmental crisis and knew we would need a radical solution. He devoted the last part of his life to providing one, with his discovery that the earth produces an unlimited reservoir of natural electricity and his invention that harnesses it, based on an entirely new understanding of physics. Tesla’s ideas were so advanced for that time, and challenging to mainstream science, that all funding for his projects was withdrawn, his name seemed to disappear from the history books, and since then all of this visionary work has remained veiled in mystery.

What Nikola Tesla had discovered is the primordial, cosmic energy that emanates from the sun, the energy that creates light and that makes everything in the universe spin. It is produced by the spinning earth, within stars, in the cosmic vacuum of space, and Nikola Tesla found a way to produce it with his invention known as a ‘Tesla c 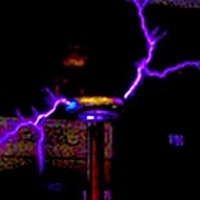