The Sport of Spoken Word

SlamNation chronicles The National Poetry Slam - the Olympics of verse, in which spoken word artists (the adrenaline junkies of the literary world) compete fiercely in battle poetic.

SlamNation is a feature-length nonfiction narrative that takes you on a trip through this phenomenon, following New York City's novice team on its journey to join over 120 spoken word artists on 27 city teams at the National Poetry Slam in Portland, Oregon. Here, SlamNation discovers not only the raw energy and sheer talent of some of the greatest performance poets in the country, but a good old fashioned tale of heroes and villains amidst the dramatic tension of fiery competition.

From the inevitable rivalries, highly charged controversies, and unusual characters emerge some classic struggles such as art versus ego, and self-expression versus self-advancement. The stakes are unexpectedly high: audience adulation and thunderous applause that few poets will ever experience. 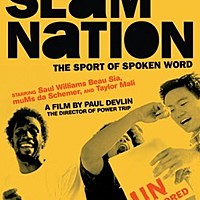