His filmmaker son probes the life and work of his father, music visionary Raymond Scott.

Watch the Trailer or Rent or Buy the film for streaming!

Deconstructing Dad: The Music, Machines and Mystery of Raymond Scott is a documentary exploration of the life and work of American maverick composer, bandleader, inventor, and electronic music pioneer Raymond Scott (1908-1994), presented from a unique perspective--the filmmaker is his only son. Going beyond biographical documentary, it is also a personal quest to unravel the timeless fabric of love, connection and rejection that are a part of every parent child relationship, But combined with this personal angle is always a return to the fascinating story of this music innovator who had a meteoric rise to household name success, a slow spiral into obscurity, and now, posthumously, a growing national and international awareness of his vital role in modern music.

Scott had an incredibly eclectic career, not only was his music used extensively in Warner Bros. cartoon, he's also been called the Father of Modern Electronic Music due to his ground breaking electronic music inventions. 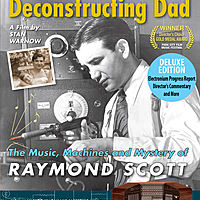