“What is thy request? Even if it be half the kingdom you may have it”
The Scroll of Esther (5:3)

How much power do women have to change age-old religious and social structures? Will altering religious practices to allow fuller participation by women fundamentally change the fabric of the religion?

In this provocative documentary film, Half the Kingdom, seven remarkable Jewish women from Canada; the United States and Israel , strive to find common ground between religious and cultural tradition and contemporary feminist principles.

The quotation from ‘The Scroll of Esther’, one of the rare books in the Hebrew Scriptures to bear a woman’s name, symbolizes the quest of contemporary women for equality. Half the Kingdom addresses a basic issue faced by women in the majority of mainstreams religions. It concerns issues not only of feminism, but also of religious pluralism and civil rights. Whether Jewish or not, one will gain inspiration from the seven indomitable women portrayed in 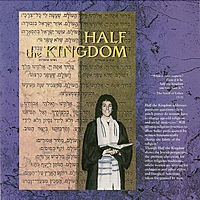