A Vietnam War story of bravery, and survival, against all odds.

Vietnam, 1969. 21-year-old U.S. Army Special Forces Captain William Albracht is assigned his first command at Firebase Kate, near the Vietnam-Cambodia border. He is the youngest commanding officer in Vietnam. The day he arrives, the firebase comes under heavy attack. It soon becomes apparent that the 26 Americans and 100 Montegnard soldiers on the base are surrounded by thousands of North Vietnamese troops making a major push into South Vietnam. The severely outmanned and outgunned outpost will soon be overrun. Out of options, and against all odds, Albracht leads a desperate late night escape and evasion through a jungle filled with enemy soldiers. Miraculously, all but one man survives the escape.

Primary narrative supplied by 12 of the US soldiers who were on Firebase Kate, including the helicopter and airplane pilots who flew in and around the firebase.

Audio recordings of actual radio communications between ground and air troops from 1969 included throughout the film. 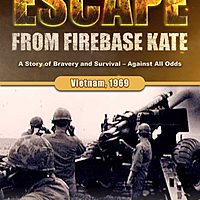