Based on a true story, ELENA obliterates the line between documentary, diary and fever dream.

Elena, a young Brazilian woman, moves to New York with the same dream as her mother: to become a movie actress. She leaves behind her childhood spent in hiding during the years of the military dictatorship. She also leaves Petra, her seven-year-old sister. Two decades later, Petra also becomes an actress and heads to New York. At first in search of her destiny, but increasingly, in search of Elena, Petra has only a few clues: home movies, newspaper clippings, a diary and some letters.

Gradually, the features of the two sisters are confused; we no longer know one from the other. When Petra finally finds Elena in an unexpected place, she has to learn to let her go. ELENA is a film about the persistence of those memories, the irreversibility of that loss, and the impact the absence of her sister had on the seven-year-old girl. 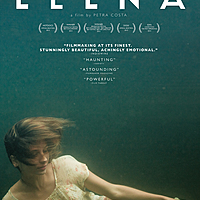