FM is a feature length doc about the miraculous run of the 1960 gold medal hockey team.

For many Americans, the 1980 Miracle on Ice was the beginning of hockeyâ€™s history in the US. Youth leagues exploded, the NHL expanded,and indoor ice rinks spread to every corner of the country. But 20 years earlier, the few Americans tuned in to the first-ever televised Olympic Games saw a remarkably similar sight.

Itâ€™s a story that shares many connections with the 1980 Miracle team, but the 1960 team also had its own unique challenges. The team had never beaten the Soviets, the Canadians had dominated the sport for decades, and internal dissent threatened to rip the team apart from within.

By winning seven games in ten days, the 1960 team achieved something that has still never been matched by an American hockey team: an unblemished record in an Olympiad. But for all the greatness of the 1960 US Olympic team, they remain a footnote in the history books. Itâ€™s a triumph that could aptly be called a â€œForgotten Miracle.â€ 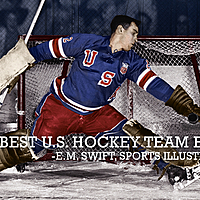