A poetic exploration of the ephemeral experience of immigration in Greece through dance.

A group of asylum seekers in Greece join with artists for a performance project. The participants improvise duets and group dances amidst ruins and graffiti in Athens, while we hear them recount painful stories of their pre-flight suffering, harrowing journeys, and reflections on Greek life during the financial crisis and rising fascism. Physically, they explore the question of how a body can find softness and resiliency when their surrounding environment is harsh. The refugees come from Afghanistan, Albania, Bangladesh, Senegal, Tanzania, and Turkey, and include a Kurdish political prisoner, a sex trafficking victim, and victims of the Taliban. "bodies of resilience" is a filmed performance outside a traditional theatrical setting, but contains intimate elements of real life revealed through audio interviews. The participants provide a soundtrack of folk songs sung in their native languages, and speak in Greek. An English translation is provided using English-speaking voiceover actors 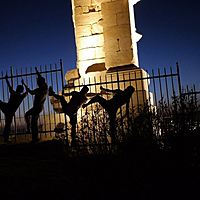