What job entity wields the most private power on the planet and yet has no public face?

What job entity wields the most private power on the planet and yet has no public face? Motherhood, the world's most demanding, least compensated job. Where only perfection is acceptable and failure is certain. And who are these women who become mothers even when their creative compulsion tells them not to? Lost In Living focuses on that very issue. This story is about feeling like an outsider and wanting to be special. About wanting to be heard and don't we all?

Behind the domestic curtain of motherhood, where the creative impulse can flourish or languish, are four women determined to make a go of it. Filmed over seven years, Lost In Living, confronts the contradictions inherent in personal ambition and self-sacrifice, female friendship and mental isolation, big projects and dirty dishes. The complex realities of family life unfold in this documentary film about the messy intersection of motherhood and artistic expression. 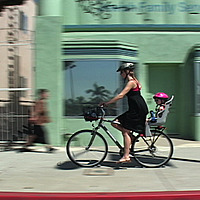