Bojan (aka RAPRESENT) is an orphan refuge in his late teens living on the streets of Belgrade.

Graffiti art and hip hop present for him a means of escape from the harsh reality of homelessness and drug addiction that has become his life. Bojan tells us his story over the discarded leftovers of a childâ€™s birthday cake that he finds in a dumpster. Over the course of the film, this small gesture grows into something symbolic, namely a symbolic picture of lost childhood; not just Bojanâ€™s, but of a generation that grew up in the shadow of the Yugoslav wars. Bojan died of a heroin overdose six months after the film was made. He was just 21 years old.The film is a memorial to Bojan Radanov and his generation as well as a testament to the soulâ€™s yearning for a better life even in the midst of societal apathy, abandonment, and crippling addiction. â€œRapresentâ€ is Bojanâ€™s story, told his way, and in the end is the heartbreaking record of a life cut too short too soon 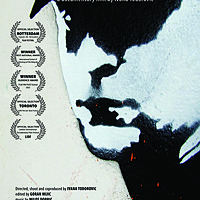