The Last Flight of Petr Ginz

A testament to how a boy's creative expression represents the best of what makes us human.

By 14 he had written five novels and penned a diary about the Nazi occupation of Prague. By 16 he had produced over 150 drawings and paintings, edited an underground
magazine in the Theresienstadt Ghetto, written numerous short stories and had walked to the gas chamber at Auschwitz.

Much of Petr's story was unknown until the 2003 Columbia space shuttle tragedy. Israeli astronaut, Ilan Ramon, carried with him into space Petr's drawing, Moon Landscape. The publicity surrounding the flight and its explosion led to the discovery of Petr's diary and additional artwork and short stories in a Prague attic.

Through Petr's artwork, novels, short stories and magazine articles, the viewer will see Petr make the journey from precocious child to young adult, from innocence to the painful awareness of inhumanity, from gifted artist and writer to prodigy. 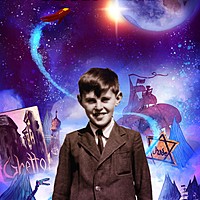