Where the North meets the South in the heartland of America

Between Two Rivers is a feature documentary about Cairo, Illinois, a historic rivertown with a dark and turbulent past; isolated at the confluence of the Ohio & Mississippi rivers, where the North meets the South in the heartland of America.

Cairo is a town scarred by historic conflicts and bitter divisions. Today, it struggles to survive in the face of severe economic and environmental pressures. Between Two Rivers presents a dramatic and moving picture of this unique place and its people, and looks at how the two great rivers have shaped its destiny for over 170 years. The film sets Cairoâ€™s tumultuous past against the backdrop of the latest crisis to afflict the community: the record breaking floods of spring 2011, when the rising Ohio & Mississippi rivers threatened to engulf the town. As the rivers crested, the town was evacuated and a political battle erupted over a plan to rescue the town by detonating levees protecting thousands of acres of rich farmland. 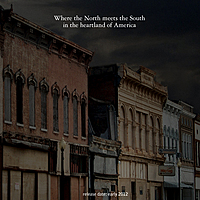