Why do women stay in the Catholic Church today?

As the Catholic Church continues to play a role in a number of controversial areas of modern life, the nun in her habit stands as a symbol of the Church's positions on everything from abortion to war. In the process, she loses her own identity, her own thoughts and opinions, in the eyes of the rest of us. 'Women of Faith' is a film that seeks to pull back the veil and allow women with intimate knowledge of the Church to speak their minds about everything from homosexuality to women's ordination to the Church's role in Latin America. Interviews include several active and contemplative nuns, a former lesbian nun, and a woman who became an illicit Roman Catholic priest in the face of possible excommunication. Filmmaker Rebecca M. Alvin examines nuns the way she examined sex workers in her 2001 film 'Our Bodies, Our Minds' - letting them speak for themselves. 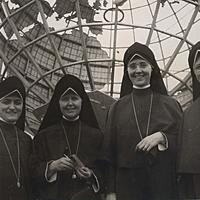