Writer-director Joe Cornish follows Edgar Wright, Simon Pegg and Nick Frost as they travel to various American cities to promote their cop comedy Hot Fuzz back in spring 2007. Between various interviews, film showings and Q & As, they visit iconic film locations, check in to several hotels and generally mess around. It’s an unusually candid and often very funny look at the often tedious promotional process featuring plenty of geeky film references, fashion disasters and birthday cake disposal. Cornish seems to have captured the majority of his time on their trip and this 70 minutes of highlights just flies by, due to the excellent company of the talented trio. Plus, there’s guest cameos from legends Timothy Dalton and Kevin Smith! 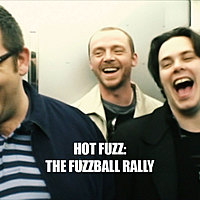