The Democrats played to win.

In 2006, Democrats face a moment of truth. Republicans control all three branches of government and possess more concentrated power than in nearly a century.

Facing the prospect of becoming a permanent minority party, Democratic leaders -- captained by Rahm Emanuel -- form an aggressive and risky strategy to take back Congress, while Republicans prepare to play defense. HouseQuake gets inside seven key races across the country and follows national players on both sides of the isle.

In the end, dozens of seasoned politicians are defeated by political newcomers swept in by a national tide, forcing a reconsideration of the maxim â€œall politics is localâ€ by politicians and pundits alike. This historic campaign for change ends the Republican revolution, paves the way for Barack Obamaâ€™s presidential victory, and transforms the way political races are run in the United States. 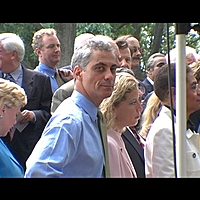