A son confronts the enigma that is his father, a sixties dreamer one scheme away from financial ruin

A stalwart of the protest movements of the 1960s, Kit Bricca worked with everyone from Joan Baez to Cesar Chavez to Daniel Ellsberg and helped start Amnesty International USA. Yet there was another Kit Bricca, the man who sold commodities and life insurance, silver and gold. And yet another in the guise of his alias Tatanka who was a shamanic healer and clairvoyant, spending six years roaming the woods of rural Idaho in search of a higher truth.

As 2013 arrives, Kit’s son Jacob arrives at his father’s doorstep in search of answers. Piecing together the facts of his father’s true identity via never before seen footage from the heady days of the Sixties, motivational videos from the Eighties, and stranger- than-fiction verité scenes in the present, Jacob tells a sweeping story about fate of American idealism and the thin line between dreams and delusions. Following his father on adventures with inventors and healers, visionaries and psychics, he paints an indelible, bittersweet portrait 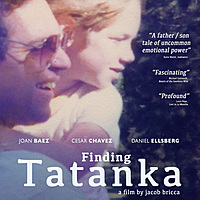