A story of a rural, gay, black, devoutly Christian, gospel musician that took 35 years to tell.

Earl was well-known in traditional music circles in the Appalachian region and performed at music and folk festivals around the country. Filmmaker Andrew Garrison began filming Earl in 1982, when Earl was 58, and continued to visit him in Clinchco for almost twenty years. BECAUSE I’M HERE is a portrait of a singular, creative spirit, unapologetic in his being and expression.

Earl traveled widely but always came home to his three-room house. Earl was a beloved and essential member of his community, working with generations of children and leading the choir; and disapproved of by some because of his sexual identity. “No man can judge me," said Earl, “Only God.” Earl died in 2000 at age 76. 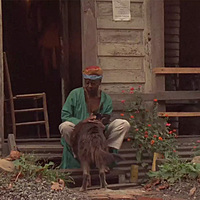