It's all about power.

“Green Green Water follows U.S. consumer, Dawn Mikkelson, as she traces the source of her ‘green energy’ back to the displacement of the indigenous Cree and Metis in Northern Manitoba. Whitewashed under auspices of renewable energy, power suppliers Xcel Energy and Manitoba Hydro provide cheap hydro-electric power to Minnesota – energy that comes at the price of mass flooding, destroyed land and devastated communities, a far cry from the ‘clean and green’ tranquility of the energy company’s posters. Dating back to pressured agreements signed in the 1970s, the hydro-electric dams harshly disrupted the sustainable practices of indigenous life. Now, as a new set of dams are being proposed, the communities stand at the crossroads, divided. . . A cautionary tale of consumer consciousness, Green Green Water exposes the important story of displacement, resistance and insidious public relations that lie beyond the energy grid.” — Anita Wong, Planet In Focus Environmental Film Festival, 2006. 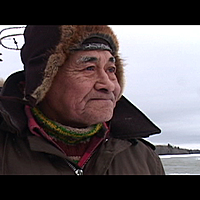