From a Liberal Arts college in Massachusetts to the foothills of the Blue Ridge Mountains in Virginia, Patrick Olwell's journey has led him to become one of the great wooden flute makers of all time.
With a quirky sense of humour and the voice of a storyteller, Patrick recounts his humble beginnings as an instrument maker, living in a cabin in rural Virginia with no electricity or running water, and his slow climb to prominence as his flutes become some of the most sought after instruments in Celtic music. In a voyage of discovery, the film weaves together not just Patrick's story, but also the many steps in making a flute, some rare wood trivia, Irish sessions, archery, swimming, laughter, tears, and interviews with some of the most dynamic Irish musicians out there today. A genuinely human portrait of an intelligent, passionate craftsman, 'The Keymaster' is a film for everyone, and shows what can happen when you never give up on your dreams. 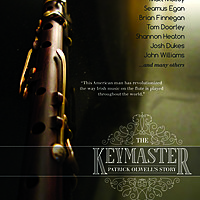