LLAMA NATION explores the quirky, competitive world of llama breeding, training and showing in the US. The film follows passionate llama owners each with their own unique story, including two 16-year-old girls as they compete in hopes to become the national llama show champion. Janessa Hall and Hunter Snow are complete opposites of each other except for the fact they both competitively show llamas. Every year, the two girls are neck and neck en route to the national llama show each year, but only one can take home the first place ribbon. Also featured are Jack and Tracy Pearson, the godparents of llama culture in the United States, and Ron Shinnick, llama carting king and mayor of a small town in Georgia. 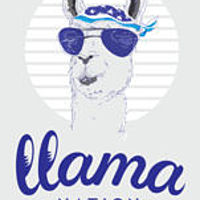