The Karamazoffs (A walk on the SoHo years)

The 1970s and 80s in New York’s SoHo, one of the most creative eras in contemporary art.

In the 1960s, the abandoned factories of New York’s SoHo were occupied by artists from around the world, sparking the beginning of one of the most colourful periods in contemporary art, with the boom of open studios, conceptual art, happenings, performances and video art.
The Karamazoffs, a group of artists arrived from Barcelona, along with colleagues and pioneers from that era, like Jonas Mekas and Jaime Davidovich, recall their personal experience and the artistic atmosphere through the 1960s, 70s and 80s in SoHo.
With archival footage featuring, among others, Jonas Mekas, Yoko Ono, Laurie Anderson, Lou Reed and the Velvet Underground, George Maciunas, Fluxus, Charlotte Moorman, Andy Warhol,
Jaime Davidovich and The Karamazoffs. 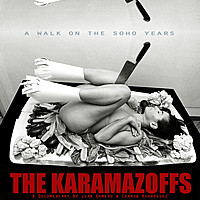