Sometimes she paints gelatinous fairies, pregnant men, amorphous bodies. At other times joyful beings, creatures in paradise and flying people emerge on her canvasses. Monstrosity and tenderness lie side by side in Oda Jaune’s paintings, just as they disturb and move those that view them. Born in Sofia in 1979, the painter studied at the Arts Academy in Düsseldorf and became a star pupil of Jörg Immendorff. She also became his wife. After her husband's death she moved to Paris to pursue her work there. Her gallerist also represented Andy Warhol and Roy Lichtenstein.
A film biography about a young artist as successful as she is shy? No. Rather, it's an account of a complicated encounter. During their collaboration the protagonist repeatedly has qualms, withdraws and refuses to comply. For her part, the filmmaker deploys cautious manoeuvres in order to make visible something of Oda Jaune's fragile act of painting, without damaging it in the process nor resorting to trite illustration. 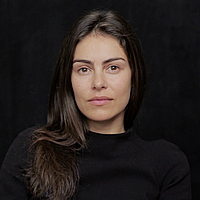 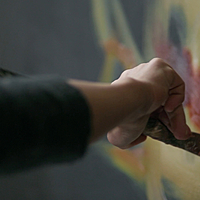