Racing Dreams, winner of the Best Documentary at the Tribeca Film Festival, is a coming-of-age story about two boys and a girl who dream of one day racing in NASCAR.

As they race their way through the year-long championship series, they must also navigate the treacherous road between childhood and young adulthood. In intimate moments of young love and family struggle, this exciting and often humorous story has been fondly described as "part Catcher in the Rye, part Talladega Nights." 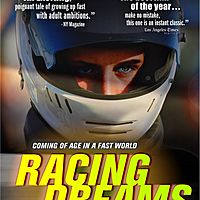