With a dad incarcerated for murder, a mom on drugs & a childhood in foster care, Charell knew it was

When her great-grandmother becomes ill, Charell, a young African-American girl, is taken to the home of strangers. She doesn’t remember their names or where she lived, but she recalls the abuse and loneliness. She recalls watching her belongings being thrown into trash bags and the lies she has to tell other kids because she doesn’t want to admit she’s a foster child. She doesn’t want to admit that her mother struggles with substance abuse, her father is drug dealer imprisoned for murder and that she doesn’t have a permanent place to be.

School becomes the only place where Charell feels safe, where she feels rewarded. Despite bouncing around from school to school, never starting and finishing a year at the same place, Charell finds solace in learning and decides she wants to be more than the sum of the parts that brought her to this place in life. 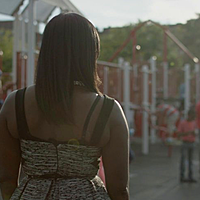