Filming a one woman play for the cinema sounds straightforward but proves anything but.

In 2013 Edinburgh based womenâ€™s theatre company Stellar Quines set out to discover how they could reach a larger audience in the cinema, something big players like the UKâ€™s National Theatre and the New York Met Opera have had conspicuous success with but which, until now, has been beyond the reach of smaller theatre companies.

Restaging their 2012 Edinburgh Festival â€˜Fringe Firstâ€™ winning production of Canadian dramatist Jennifer Tremblayâ€™s hit one woman play The List, starring Maureen Beattie, Stellar Quines commissioned BAFTA winning film director Morag McKinnon to work alongside the companyâ€™s Artistic Director Muriel Romanes and her team to produce a cinema version of the play. Their aim was to create a filmed experience that didnâ€™t compromise the live-ness and intimacy of the actorâ€™s relationship with an audience.

What happened next is the subject of â€˜Filming the Listâ€™, a half hour observational documentary that goes behind the scenes was the two groups of professionals 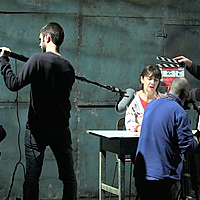