Kiosk, A Generation Destroyed By Madness

Kiosk - the band and the movie - makes music from the howl of oppression.

Video from Kiosk, A Generation Destroyed By Madness

Founded in 2003 by lead singer and guitarist Arash Sobhani, Kiosk is Iran's most prominent underground rock band. At first, the musicians met in back alleys and basements around Tehran - in any little 'kiosk' beyond the regime's grasp. Their lyrics pry the skin off the Islamic Republic and hold up a mirror to the ghosts beneath.
Where the regime promised 'an explosion of light' following the 1979 Islamic Revolution, many Iranians heard only bullets and hypocrisy. And when the slogans of reformists proved empty, Kiosk put the disillusionment of millions into their mellow beats. Using humour and irony to sing painful truths, Arash and his bandmates give voice to the anger, creativity, and most of all, to the fierce independence of Iranian youth.
In many ways, Kiosk became the voice of the revolution. Not the holy war waged by clerics and politicians. But the revolt of the free mind against the boot-heel of tyranny. 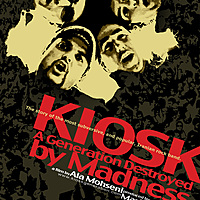