Man In The Sand

When Nora Guthrie, daughter of folk legend Woody Guthrie, unearthed a 50-year-old, unproduced collection of her father's lyrics, she called upon British songwriter Billy Bragg to put them to music. Bragg teamed with Chicago-based, alt-country band Wilco, and in 1998 {^Mermaid Avenue} was released to critical adulation and a Grammy nomination. Two years later, {^Mermaid Avenue, Vol. 2} was released to equal fervor and another Grammy nomination. Narrated by Nora Guthrie, this feature-length documentary chronicles Bragg's search "...for the spirit of Woody Guthrie," as he travels to Okemah, OK, where Guthrie was born, and to New York City where he gained notoriety. From there, the film follows Bragg to Chicago to meet up with Wilco, and finally to Dublin where the albums were recorded and where the creative process sometimes caused emotions to run high between Bragg and Wilco's Jeff Tweedy and Jay Bennett. 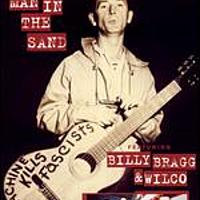