My Father and The Man In Black

MY FATHER AND THE MAN IN BLACK - Official Trailer

The Man in Black was, of course, Johnny Cash. Saul Holiff was his long-time manager, a dedicated, remote, often cruel man who committed suicide and left his son with a lot of unanswered questions.

Jonathan's documentary is an investigation of his fatherâ€™s life and that of the celebrity who dominated it. The Canadian-born Saul was a self-made man, an ambitious promoter with a love of music that brought him together with one of the great figures of 20th-century pop culture.

Both Cash and his manager were strong men with serious weaknesses; we learn of their triumphs and failures, their mutual resentment and envy, their troubled relationships with their families. The film is respectful but never hagiographicâ€”it shows the good and the bad, the public and the painfully private.

Mixing found footage, creative re-enactments and poignant narration, the documentary tells a riveting story with creative means. Itâ€™s an act of catharsis for its maker, and a fine piece of journalism. [VIFF] 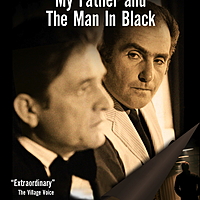