The Dragons of Jim Green

Jim Green has turned his house into a crumbling museum exhibiting what he claims are artifacts in rock from the deep past, remnants of a hyper-advanced civilization of reptilian humanoids.

As a young boy, Jimâ€™s grandson Randy was entranced when he first heard these epic tales, and later he promised Jim he would discover the truth. Returning to South Carolina, Randy meets with scientists, family members and Jimâ€™s old colleagues. What he finds includes war trauma from remote tropical islands, supernatural phenomena, science fiction writing, and his own surprising role in his grandfatherâ€™s stories. 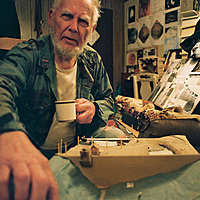