Brother Jesse is a short documentary that follows Jesse Morrell, a confrontational traveling campus preacher. Jesse's approach is offensive by most standards, and tows the line between what is considered acceptable (or free) speech and hate speech. This often results in hostile students, large crowds, and confrontations with the police. The film explores Jesse's background and motivations, and provides an intimate portrait of a religious extremist. 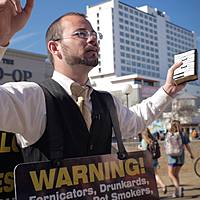