The Documentary Film about Magic's Better Half.

Women in Boxes is the first film to uncover the story of the Unsung Hero behind the magician. The devoted, if not masochistic Magic Assistant who distorts her body into impossible positions while the magician cuts her in pieces, stabs her, sets her on fire, crushes her, makes her disappear, then restores her to life with a dramatic Taa Daa and takes a bow to wild applause. Who is the woman who would subject herself to such torture, not to mention, the Magician's Ego? Are these women just bimbos parading around in skimpy clothes? Or are they the real magic behind the Illusionist?

Heretofore sworn to secrecy, this tough yet feminine group opened their homes, hearts and lives for the filmmakers and gave an insiderâ€™s view of love, life and magic family values. As this is a family affair, many of the women are joined on camera with their â€˜more famousâ€™ husbands, and some are interviewed with their daughters as they take their turn in the box. 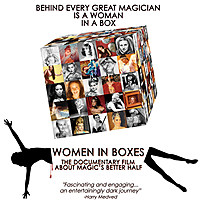