"Fencing: the Art, the Science & the Passion"

"Fencing: the Art, the Science & the Passion" Trailer

This 6-part documentary introduces the intensely competitive world of the sport fencer & the elegant traditional moves of the classical duelist. â€œFencingâ€ takes you inside bouts at fencing academies in the USA and fencing clubs in London, where fencers reveal what itâ€™s like to outwit an opponent.

Through exciting close-ups, fast moving action of dueling weapons is captured with a clarity rarely seen on TV or in movies. Slow motion let you see that magic moment of a â€œhitâ€ or a â€œnear miss.â€ Performed for this film is a musical re-enactment of a baroque fencing bout in period costume.

â€œContrasts the traditions of fencing with the modern game. Experts around the world illustrate how this elegant sport appeals to both young and old alike."Michael Cusack, Annandale, NJ 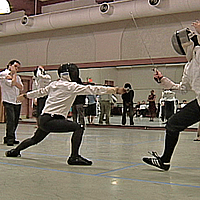