A quest for the soul of a city

Before "L.A. Confidential," there was "Shotgun Freeway"-- the groundbreaking 1996 documentary about Los Angeles coming to grips with its own history. Against a backdrop of never-before-seen archive footage, Shotgun Freeway presents a diverse group of Angelenos who guide the film through their own past as well as the city's. A political and social history of Los Angeles, using old stills and news footage, contemporary footage, and commentary. Bert Corona is our guide for East Los Angeles, Buck Henry for Hollywood, David Hockney for the art scene, Elaine Young for Beverly Hills, Buddy Collette and Gene Norman for Central Avenue and music, Margaret Crawford and Joan Didion for the San Fernando Valley, James Ellroy for noir L.A., Frank Wilkenson on land use and L.A.'s poor, and, throughout, the observations of Mike Davis, L.A.'s pre-eminent social historian. "Shotgun Freeway" will show you a Los Angeles you never knew existed. 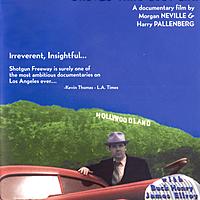