The story of the art that defies our differences.

Cinema is the ultimate out-of-body experience. It can reach across borders and oceans and create empathy through the vivid telling of stories from everywhereâ€”and there has never been a more important time to step into the shoes of people from other cultures.

"Cinema is Everywhere" captures the state of the world's most popular art form today by tying four narratives from around the globe together with insights from acclaimed filmmakers and ordinary moviegoers. An aspiring actress in Mumbai battles to break into Bollywood; two friends in Scotland take a mobile film festival across the highlands; a young crew in Hong Kong embarks on the shooting of their first film; a Tunisian director anxiously anticipates the premiere of his controversial film. These stories are woven together with scenes from projection booths, studios, streets and slums into a vivid meditation on the power of cinema to shape our world. 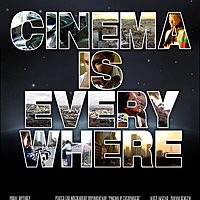