Through the Garden Gate - A Diary of the English Countryside

A globetrotting wildlife cameraman's discovery of his own backyard

Taking a break from globe trotting, EMMY and BAFTA award winning wildlife cameraman Stephen de Vere creates a 50 minute film charting his unique and intimate experiences in the natural world discovered in his own backyard.

Through the changing seasons of a year - Stephen observes and films the animals and birds hidden in hedgerows, woods and fields beyond his garden in Oxfordshire. Hearing only the sounds of the wild and the cameraman's narration, we re-live his experiences of being there to capture month by month highlights such as hares boxing, fox cubs at play, sparrowhawks mating and baby owls being fed in their nest.

With patience, humour and skill he shares the cameraman's perspective of his local wildlife to both specialist and enthusiast alike - at the same time giving us first-hand insights into the making of a wildlife film. 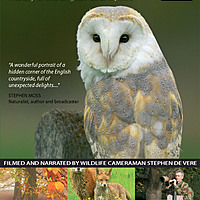