Set in the cutthroat, male-dominated world of high school debate, where tomorrow’s leaders are groomed, GIRL TALK tells the compelling and timely story of five girls on a top-ranked Massachusetts high school debate team as they strive to become the best debaters in the United States.

The Newton South Debate Team is one of the largest in the country, with a diverse roster of debaters; nearly half are girls and many are first generation Americans. Unlike most of their elite competitors, Newton South is only allotted a part-time volunteer parent coach, and the team must rely on one another to master the art of debate.

Shot over four years, GIRL TALK offers a front row seat to leadership in the making, as each year varsity members step up to become captains and bear the responsibility of training and inspiring the novices. The girls set out to find their particular voices — perfecting their speaking and research skills, while grappling with confidence issues, and learning to weather t 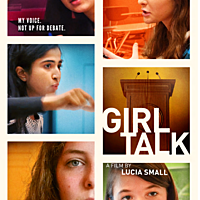