Who is Vermin Supreme? An Outsider Odyssey (2014)

Vermin Supreme is no ordinary presidential candidate. Promising a free pony for every American, a fully funded time travel research program, and unprecedented zombie preparedness initiatives for a new American Republic, he truly is the people's candidate and the friendly fascist par excellence. "Who Is Vermin Supreme? An Outsider Odyssey" follows Supreme's raucous 2012 campaign from the Rainbow Gathering in the the Cherokee National Forest to the Democratic and Republican National Conventions to Occupy Wall Street protests, and all the way to heart of the American Empire in Washington, DC. From the unsettling gravitas of marauding riot police to the unbridled joy of songs sung for police officers and pranks played on anti-abortion fanatics, "Who Is Vermin Supreme?" is certain to show you America as you've never seen it before. 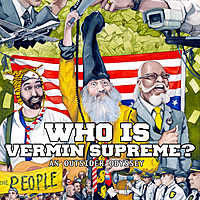