Indentured investigates the living conditions of South Asian laborers working on U.S. military bases in Iraq. Thousands of nameless workers, called Third Country Nationals because theyâ€™re neither American nor Iraqi, toil inside U.S. bases in Iraq as food servers, custodians, construction workers and more. But unlike American contractors who often make six figure salaries in Iraq, these men typically make less than two dollars an hour. Nepalese custodians talk about the illegal brokerâ€™s fees they had to pay to get their jobs on the base. A Nepalese supervisor explains how they are brought into Iraq against Nepalese and Iraqi law. These testimonials are presented along side the U.S. governmentâ€™s guidelines to define human trafficking, which suggest that large-scale labor abuses are happening inside U.S. bases in Iraq. 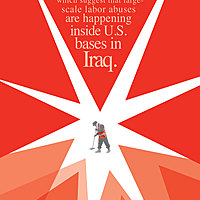