Lanfranchi's Memorial Discotheque was Sydneyâ€™s favourite artist-run space, situated on the second level of an inner city warehouse. Lanfranchiâ€™s doubled as a residence and unauthorised performance venue for five years, growing from unlikely beginnings to become what director Neil Armfield described as a â€˜major strand of our cityâ€™s cultural DNAâ€™. The decaying warehouse hosted hundreds of shows and was an accessible starting point for Sydneyâ€™s emerging performers, artists and musicians. That is, until property development gets in the way and Lanfranchiâ€™s residents are given sixty days to vacate the building.

The story of Lanfranchiâ€™s is told through ex-residents such as Lucas Abela (Justice Yeldham); an experimental musician who plays amplified sheets of broken glass with his mouth. A show he developed at Lanfranchiâ€™s and has since performed in more than forty countries. Others soon to be displaced include Dorkbot; a community of electrical engineering artists, the bastard cover band 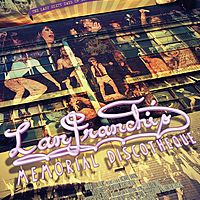